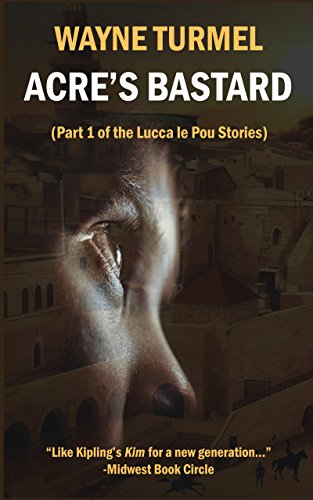 I asked quirky questions of Wayne Turmel! But first, check out the book: https://www.amazon.com/Acres-Bastard-Historical-Fiction-Crusades-ebook/dp/B07CRS9H2L

Wayne, you’re in the hot seat!

So, Wayne, what’s your favorite sound?

Little kids laughing their butts off. There’s nothing better for the soul and it’s more contagious than Ebola.

My house is filled with it! Kids’ laughter, I mean, not Ebola! What is one of your favorite quotes?

I read something in a cheesy Don Pendleton spy novel when I was a kid and it stuck with me. Later I found out he stole it from Ian Fleming: “Once is happenstance, twice is coincidence, three times is enemy action.”  In other words, never overreact to something, and be open to the idea that s*** happens. If it happens a lot, though, there’s probably some evil weasel behind it. Hunt him down and kill him.

I am on the hunt! Meanwhile, if you were reincarnated as an animal, what would it be?

I want to come back as a sea otter— adorable, spending all day at the beach, eating seafood off my tummy. There’s a life for ya.

That is the life, I agree! Are you usually early, late, or on time?

I’m chronically, pathologically, annoyingly early for everything. My mother always told me if you’re late it’s because you think your time is more important than the other person’s time and that’s just rude. It scarred me for life. Drives my wife, The Duchess, crazy.

You can’t rush a Duchess! What do you think the best invention is?

Definitely hot and cold running water. It changed cooking, health, and most importantly sex. It’s no coincidence that the sexual revolution happened once you could take a shower first.

I hadn’t thought about it before, but that makes a lot of sense! What is your motto?

Those who forget the past are doomed to repeat it. The rest of us are doomed too, but at least we get to stand there smugly and say, “told you so.”

Love it! So tell us: Do you believe in aliens?

Oh lord, I hope they exist. If we’re the smartest thing out there, we’re soooooo screwed.

My thoughts exactly! Thank you, Wayne, for putting a smile on our faces today! If you’d like to support Wayne, check out his book and share this post anywhere you can! Then take a shower and come back next Friday for a new round of questions with quirky people!