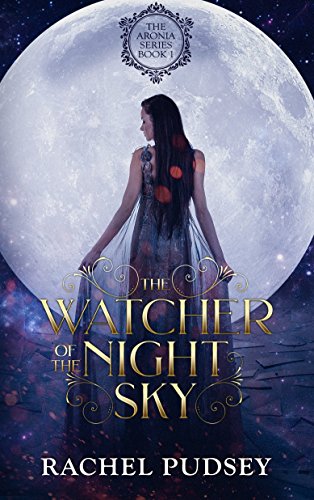 I asked some quirky questions of Rachel Pudsey! But first, the book: https://www.amazon.com/Watcher-Night-Sky-Aronia-Book-ebook/dp/B00Y7M5V9W

And show some support on social media:

Now for some questions!

Music time! What song are you listening to right now or what song did you listen to last?

Oonagh – Avalon. I’m a huge fan of fantasy rock (Edguy, Avantasia, Within Temptation…) so I seem to end up listening to a lot of German rock or similar through Youtube’s randomness. I discovered Oonagh when my playlist switched to a band called Hammerfall and then Oonagh. It seems to be a kind of Celtic/fantasy style music – but I actually have no idea what the lead singer is singing about (lol). It’s great for some background music – sometimes classical music can be a bit depressing or uninspiring. Since I write fantasy, this music is great (and since it’s in German I don’t get distracted by the lyrics and start singing along).

I’ll have to check that one out! What would you want written on your tombstone?

Nothing gold can stay. My friends and I have had this running habit of signing our letters to each other with “Stay Gold” – a reference to The Outsiders by S.E. Hinton. The origins of that infamous line (said by Johnny to Ponyboy) comes from the poem by Robert Frost, Nothing Gold Can Stay. The purpose of the poem, I think, is to show that golden, beautiful moments are fleeting, forever leaving, and that we should realise this in order to appreciate them more. To have it on my stone is to say that I was also one of those golden moments in life that passed on… I am seriously considering getting the line as a tattoo.

I love it! Now tell us: what’s your favorite word?

Discombobulated. It is amusing, ironic and frankly wonderful to say. I wish people used it more often.

I am having fun saying that word now! What superpower would you like to have for a day?

I’d choose teleportation. I live in Korea but most of my loved ones are back in Scotland. It would be nice to head over there, spend a little time with them and in the Scottish countryside then jump on back to Korea.

I have always wanted to go to Scotland! I’ll choose teleportation, too. Would you rather fly on a dragon or meet a mermaid?

Fly on a dragon. How exhilarating would it be?? I was torn between using flight as my choice of superpower or teleportation. But, anyway, flying on a dragon would be so awesome! I really wish I could for real. Though I am sure many of us would much rather live in fantasy realms then put up with reality we live in.

This is a fantasy realm here at Quirky Questions and you’re more than welcome to ride the dragon! The mermaid will give you a ticket. Next question! What was the last movie, TV show, or book that made you cry or tear up?

This got me thinking. It is really hard for me to cry over a movie, show, or book. I think there have been like two movies in my life that have made me cry properly. I wasn’t moved by the typical (Titanic, Armageddon, etc). Am I made of stone?? When characters are killed in books, I am in so much disbelief that I don’t react to their deaths until it’s truly clear that they are in fact dead. I searched through the last Harry Potter book for traces of Dumbledore’s name prior to reading it just to make sure it wasn’t true. Then I found out it was…grrr…Anyway, I think for this one I have to say John Snow’s death in Game of Thrones. Purely because we all know that no character is safe in that show I was more accepting of the possibility that it was true. That moment when I found out that he came back was so thrilling I teared up with joy!

Spoiler alert! I cry at everything. It’s embarrassing. Moving on! Speaking of Harry Potter, let me ask: Which Harry Potter character are you?

I’m Harry. Harry Potter. 😀 I had to take a quiz to determine that one but after reading the description it seems right enough. I’m a natural leader, appointed by my co-workers as the “unofficial head teacher”, previously appointed “Shinga” (Brett Weeks character) at the cafe I worked in years and years ago. I was Head Girl in school–but the cool kind, NOT the Percy kind. I fight for the good guys. I know the difference between what is morally right and wrong. I’m impulsive and sometimes have issues with authority. I am also the owner of the elder wand (replica bought in Japan’s Universal Studios).

No one mess with Rachel and the elder wand! Thank you, Rachel, for answering my quirky questions. No one is discombobulated by these answers! 😉 Want more answers to quirky questions? Support Rachel on social media and join us here next Friday!