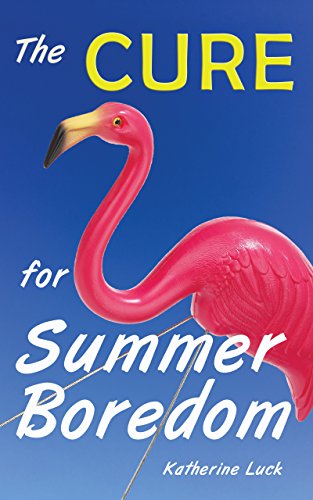 I asked Katherine Luck some quirky questions! But first, the book: http://www.amazon.com/dp/B07D1XWWHW

Now let’s have some fun!

Glitter! Edible glitter, to be clear. I had no idea such a thing existed until I wrote a scene in The Cure for Summer Boredom in which the main character, Ruby, decides it would be a great prank to swap a bag of glitter for the bag of sugar her mother’s using to bake a cake. It all goes comically awry and nobody gets glitter poisoned fortunately, but I got to wondering what would happen if someone actually ate glitter. And lo and behold, I found out that edible glitter not only exists, it’s quite the hip condiment. You can put it on anything: cake, ice cream, pudding, pizza. It makes everyday food so very fancy.

Sparkly pizza? That sounds divine! Why did the chicken cross the road?

Because the egg went first.

Some would debate that answer! What would you tell your younger self?

Don’t waste all that money at Kinkos and the post office. In a few short years, all queries will be sent via this marvelous free invention called “email.” Use the cash to buy Microsoft stock instead. Retire rich, write all day, email queries all night. Also, forget queries. There’s this fantastic free invention coming soon called “blogging” …

In all seriousness, that’s the advice I’d give today’s writers. Don’t wait for someone else to publish you. Publish yourself. But be aware that, in doing so, it’s all on you. There’s no blaming your editor when you’re the editor. And years later, you might cringe when you re-read what your “publisher” (you) decided was ready for prime time.

It’s always a shame we can’t speak to our younger selves! Coffee or tea? Iced or hot?

Coffee all the way. I found out about the traditional Swedish coffee break, fika, while writing my novel. It’s just like the traditional British “tea time,” but loaded with caffeine. I want that here! An energizing break in the work day sounds so civilized. Desperately slugging down a cup of lukewarm java that’s been sitting in the breakroom since 6 a.m. while staring at the clock, which will not move past 2:17 no matter how hard you glare at it? Not so much.

I would like that, too! I’m in! Which season defines you?

I guess the best way to describe it would be “the rainy season.” I’m originally from Portland, now living in Seattle. All my life, when it wasn’t raining, it was about to. There’s a reason they call the first month of summer “Juneuary” around here. That’s why I decided to set my novel in a very hot, very sunny (very imaginary) town somewhere in Texas called Somwärin, Texas. It’s home to a whole gaggle of wacky characters, from furniture-obsessed Swedish ex-pats to slightly supernatural trailer park residents to long-haul truckers who believe their CB radios are sending them mystical messages. And, of course, Ruby. Writing it was my way of getting a vicarious suntan.

A vicarious suntan is probably the safest! Your life is being narrated! Who is doing the narration?

David Attenborough. I feel like he could make anything I do, no matter how undignified, sound epic. “Here we see the writer searching for a synonym. First she consults the thesaurus. Then the dictionary. Then she ventures, quite hesitantly, into the untamed wilds of UrbanDictionary.com. Alarmed by what she sees, she retreats and stares at a wall for several minutes. The hunt continues…long into the night.”

That did sound epic in my head! Now, flash me! Write us a flash fiction story, no more than 50 words please!

Story in a Can

It was Blake’s first day working at the cannery. “Whatever you do,” cautioned his supervisor. “Don’t lean over the edge of the canning machine.”

As soon as his boss left, Blake leaned over the edge of the canning machine.

And that’s how, on his very first day, Blake got canned.

You nailed that flash fiction, Katherine! Thank you for being quirky with us! If you enjoyed this interview, go support Katherine on social media and read! Then come back next Friday to learn random facts about another author!