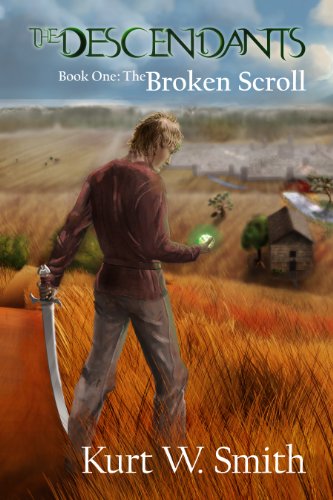 I asked some quirky questions of Kurt Smith! But first, the book: https://www.amazon.com/Descendants-Book-One-Broken-Scroll-ebook/dp/B07J1L5Y9D/ref=sr_1_1?ie=UTF8&qid=1548950710&sr=8-1&keywords=the+descendants+kurt+smith

And the social links:

Let’s get to know you, Kurt! How did you meet your best friend?

This is a story I never get tired of telling. Now, one important point of note, this is when I first MET my best friend, not when we actually became friends. There is a clear distinction.
Anyway. My family had just moved to Northern California when I was 10 years old. Being a 10 year old who clearly knew what his priorities were, I quickly decided to march over to the neighbor boy’s house, whom I had never met, and ask if he had any video games. Not just any video games either. The kid answered the door, and without any further ado or introduction, I asked if he had any Mega Man games for the original Nintendo. The answer was no and I returned home. Thus, the story of our first meeting.

No Mario Brothers? In your opinion, what is the best Disney animated movie?

I have no shame in admitting a fondness for Disney animated films. My favorite to this day would have to still be Aladdin. Need I say more. It’s just perfect. And anyone who tells you A Whole New World isn’t one of the best Disney songs of all time is lying to themselves.

It’s one of my favorite songs to belt out in the shower! What is your most bizarre talent?

This one is truly a beauty and my friends and I have gotten a lot of mileage out of it. We realized in the last couple years I have a great mind for recalling the exact year a movie released in theater. Talk about a party game.

It takes a big man to admit this number is probably much higher than it should be, which is why I’m not giving one. But that means you have the answer. Let’s be honest, though, no one loves the dark.

Raccoons do! What is your favorite potato chip flavor?

This is a tough one. Really one of the big questions in life. It does vary from time to time, but if I had to go with the all-time winner, it would be Chili Cheese Freetos. You really can’t go wrong with that quality of flavor.

That’s the one flavor always left in the bag at our house! I’ll send them to you! And your favorite drink?

To this day, it is Code Red Mountain Dew. I know, it’s shocking for an adult to mention anything other than an alcoholic drink. Code Red is completely terrible for you as all soda is, but it’s also totally underrated. If you’ve never had it, it’s like a better, fizzier, fruit punch. It’s also quite rare. I’ve only really found it in grocery stores these days, which in of itself is a travesty.

Code Red! Get that soda in stock! What is one of your favorite quotes?

I have to break the rules and go with two of them. Both of them speak to me in a profound way as a writer and lover of great stories.
“Of course it is happening inside your head, Harry, but why on earth should that mean that it is not real?”
― J.K. Rowling, Harry Potter and the Deathly Hallows

“The purpose of a storyteller is not to tell you how to think, but to give you questions to think upon.”
― Brandon Sanderson, The Way of Kings

Ah, two great quotes, so we’ll let you have both! Thank you, Kurt, for answering my quirky interrogation! Support Kurt by checking out his work! I’m heading off to sing in the shower, but I’ll be back next Friday with another quirky author!