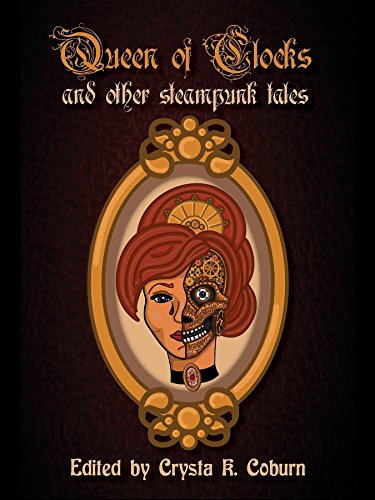 I asked the questions that matter of Crysta K. Coburn! Here is the link to follow: https://www.goodreads.com/book/show/40626676-the-queen-of-clocks-and-other-steampunk-tales

Here we go, Crysta! What is the weirdest scar you have and how did you get it?

I have a lot of scars, but this one is my first and favorite. On my left wrist, there is a mostly round, pinky nail sized scar from when a spark of fire landed on me. I was four and my grandfather was babysitting me while my mother and grandmother had a night out. Grandpa was making popcorn in this now old-fashioned popcorn machine, the kind that sits on the counter and shoots the popped kernels out of a funnel at the top. (I think they’re illegal now. Can’t imagine why.) Somehow the popcorn maker caught on fire, and instead of shooting popcorn, it was shooting sparks. I got trapped in a corner of the kitchen, sparks raining down on me, but I held up my security pillow (named Pepe) to protect my head. Only one spark landed on me, at my wrist, which was exposed from fiercely clutching Pepe. I remember vividly feeling the sharp pain as it landed and looking at my wrist only to find a spot of my skin literally boiling. It looked so cool. My grandfather managed to put out the fire, but not without severely burning his forearm. Sadly, Pepe never quite recovered after that night, but he did save me, like a good security pillow does.

Hoorah for Pepe! What is one of your favorite quotes?

This quote is from “This Is How: Surviving What You Think You Can’t” by Augusten Burroughs. It’s one of those things that really hit me when I first heard it (I was listening to the audiobook, which is hilarious and wonderful), and had to go over it again and again. I often offer it to people who are suffering from a loss. It has helped me:

“No matter how huge your loss, as long as you remain engaged with your life, the best days of your life may still be ahead of you. Don’t misunderstand me: the pain of your loss will remain with you for the rest of your life. But great joy will be there right beside it. Deep sorrow and deep joy can exist within you, side by side. At every moment. And it’s not confusing. And it’s not a conflict.”

That is so beautiful! Thank you for sharing! If you could witness any event past, present or future, what would it be?

I have often in my life thought that I would like to witness the end of the world. But that means I would be ending with the world, which is not a pleasant prospect, and I’d hate to be alone after since, to me, witnessing also implies surviving because I need to see the whole thing to say that I witnessed it. So I imagine myself as some kind of being outside of the event, just floating, witnessing. I really don’t like the thought of the void that I assume would come after, though.

That sounds like the plot of a good book….just sayin’….Do you know what your name means? Or who were you named after?

My parents hadn’t picked out a female name, so I was stuck in the hospital without one for a while (my mother says they didn’t let you take home a baby without a name in those days, and she was there recovering from surgery anyway). My father was also a writer, and he wanted his children’s names to flow just in case we ended up as writers, too (which we did, though in different capacities). He first suggested Crystal to my mother, but she had known a Crystal in school and didn’t like it, so then my father suggested dropping the L and my mother agreed. That is where Crysta came from. My father did some research and discovered that Crysta (and its many other spellings) is not only a real name, but Greek, so obviously he had to pick a Greek middle name to go with it. (Incidentally, my last name is Scottish, not Greek.) A lot of time, thought, and research went into my name, and though it may have annoyed my mother at the time, I can appreciate my father’s efforts because I am the same way with my characters.

All together, including surname and with a little modification for English syntax, my name means “the pure chosen one from the stream of the wild birds.” Neat, eh?

Very neat! You were meant to be a writer! Unicorn or Pegasus?

I just finished the first chapter of the My Little Pony tabletop RPG “Tails of Equestria” last night with my gaming crew, and my character is a unicorn because unicorns have telekineses. I also had the Duplicate power, so I could make multiple copies of myself and TK myself into the air. Boo-yah! Unicorns forever.

All hail the unicorns! Would you rather fly on a dragon or meet a mermaid?

Dragons are the greatest animal ever, so dragon all the way. I have a rampant dragon memorial tattoo for my father because he loved dragons, too. Because dragons are awesome. I used to dream about dragons often when I was younger, and I have written more than a few stories about them, though none lately. Maybe I should remedy that.

We always need more dragons! Write on! Which Greek or Norse mythology character are you?

Tiresias because I am often prophetic (rarely about good things, though) and cryptic, and I relate to switching between male and female. I would also much prefer to be the advisor to the King and not the King himself, though, I admit this can be a dangerous situation to be in if the King becomes angry. I am only blind without my glasses. I have the worst vision in my family.

The advisor is sometimes more powerful than anyone knows…Thank you, Crysta, for answering these important questions! Hop on your dragon and fly on to the next interview!